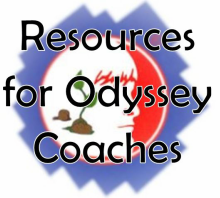 Verbal hands-on problems are like slightly more advanced versions of verbal problems. Often times, teams will still have to respond about a prompt, but this time, they normally have to make something, that they then respond to. For instance, my stereotypical VHO problem is giving each member a piece of aluminum foil and telling them to create something. Then each member would take turns responding to each of the created items.

VHO problems might also be like verbal problems with an added prop. For instance, instead of making up a story, they might have to make up a story which includes some random items on a table.

Many VHO problems will have a similar setup to verbal problems with 5 chairs surrounding a table. They might also have an additional table with materials to create whatever the team is responding to. That said, VHO can be much more variable compared to verbal, you'll see many different set ups.

All of the tips from verbal still apply. The only new tip is as follows:
If your team has to make an object, make them fairly unspecific. A beautiful dragon made of tinfoil can only be a dragon. A sphere made out of tin foil can be a rock, a sphere, a planet, a ball, or much more. [Unless the scoring had artistic quality included! This tip depends on the problem.]
Powered by